Our gut, also called as second brain, possess an undeniable capability to bring us back to life even from the dreaded cancer disease. Many microbes in our gut perform lot of activities to help us carry out a range of functions that otherwise would not be possible. For these vital functions, it is important for our gut to constantly interact with other organs to check for their well-being and maintain its own. Let us understand these conversations between our gut and gut microbiome and other organs in a little detail in this chapter.

How Gut/ Gut Microbiome coordinates with other organs?

Because our gut has to perform a tremendous amount of work with impeccable efficiency, it becomes essential to have a constant communication channel between different organs of the body. The organs like brain, heart, liver, kidney etc., and our gut maintain a bidirectional dialog through a hotline connection called as “gut axis”. A few of these major gut axes are schematically illustrated below. 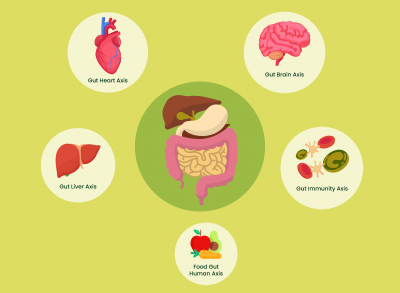 Let us understand these axes below –

Our brain and gut constantly communicate with each other while we are sleeping, eating, walking– anything and everything! Why we rely on foods to snack on days we feel nervous or how certain foods help calm our anxiety– all are a part of this communication channel. The Gut Brain Axis is a bidirectional axis that relays information back and forth between our gut and brain. This communication channel relates food to behaviour, manages the stress response of the body and helps brain take decision during fight-or-flight situation. 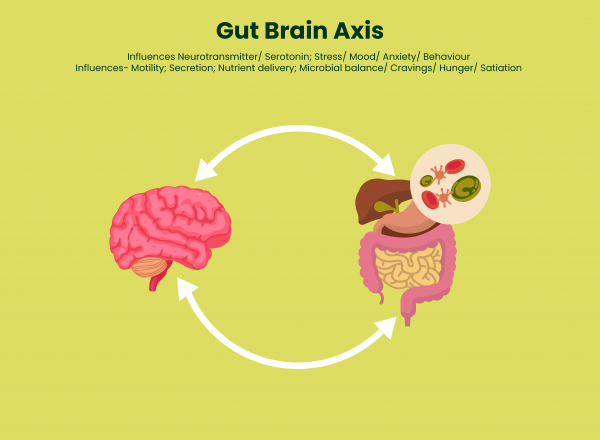 “Gut feeling” are the signals that our gut sends to the brain, which then conveys a response to the gut microbiome. The microbiota of the gut relays the information to the brain and sometimes we feel “butterflies” in the stomach.

Our immune system has co-evolved along with a diverse gut flora, not only to create defenses against pathogens but also to develop tolerance for beneficial microbes. As a result, the immune system and the gut microbiota developed a mutualistic relationship, regulating one another and cooperating to support each other (gut microflora roughly consists of 75% of immune system). 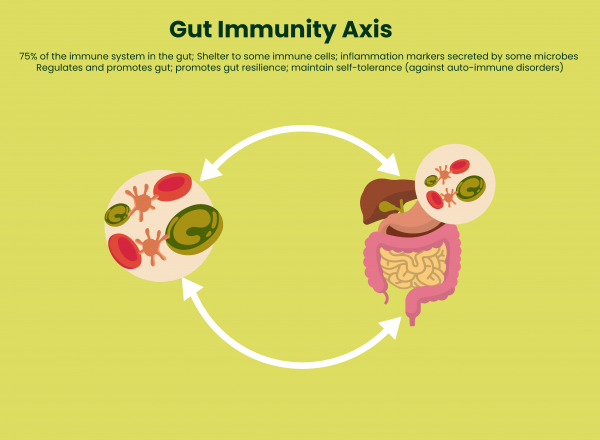 A healthy crosstalk between the gut microbiota and the immune system supports protective responses against pathogen and helps maintain self-tolerance (the ability of our immune system to not react harmfully to our own body).

The role of gut microbiota and the connection to rheumatoid arthritis or RA (an autoimmune disorder in which immune cells attack native body cells) has been studied recently, and it is found that the type of food consumed is closely related to RA manifestation. Presence of higher amounts of lactic-acid bacteria, such as Lactobacilli and Bifidobacteria– positively influence T-helper regulatory cells, in cases like IBS, pain syndromes, and reactive arthritis. In contrast, GI tracts with higher colonies of pathogens, such as clostridia or Klebsiella, may contribute to joint disease.

A relatively newer approach suggests that cardiac issues like heart failure (HF) may have a strong link with the specific bacterial strains in the gut. Many studies have confirmed the progression of heart failure to be linked with dysbiosis. A disrupted gut epithelial barrier may lead to translocation of microbial products into systemic circulation, possibly aggravating HF by inducing inflammatory responses. Studies have found that balancing the gut can mitigate the prognosis of heart disorders. 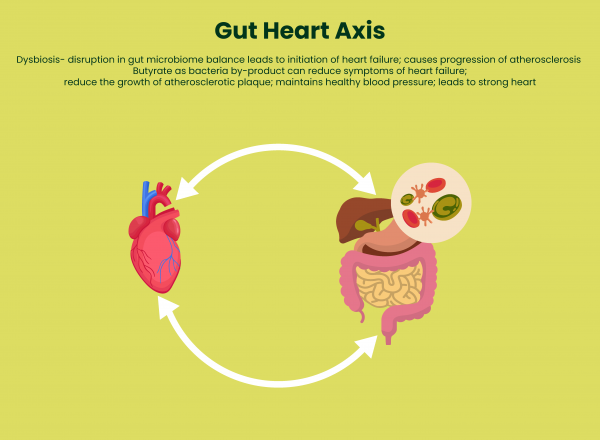 Apart from playing a part in managing heart disorders, diversity of gut bacteria, mainly in the colon produce ‘butyrate’ that help to control the progression of atherosclerosis (hardening of arteries by formation of plaque). Apart from ‘butyrate’, fermentation of fibre rich diet by gut bacteria also results in formation of compounds called Short-Chain Fatty Acids or SCFAs that promotes reduced blood pressure and strong heart.

Gut is a part of digestive system, and so is liver. They both work in close association to completely metabolize and utilize the ingested food. With the rise in the number of cases of chronic liver illness like liver cancer, Non-Alcoholic Fatty Liver Disease (NAFLD) in people suffering from gut disorders, the possible connection of gut microbiota and liver diseases have increased. The toxins produced by liver are used as a fuel by gut microbiome and help in waste elimination. A change in the number and colonies of good gut bacteria may lead to ‘leaky gut’ (where the intestinal lining becomes more permeable) that results in allowing toxic chemicals from gut to liver causing various disorders. Sometimes, dysbiosis may lead to an increase in number of colonies of a bacterium called Klebsiella pneumonae. These bacteria convert sugar into ethanol (alcohol). If the diet has high amounts of sugar and the person is insulin resistant, then the ethanol produced by these bacteria will start damaging the liver ultimately leading to NAFLD. 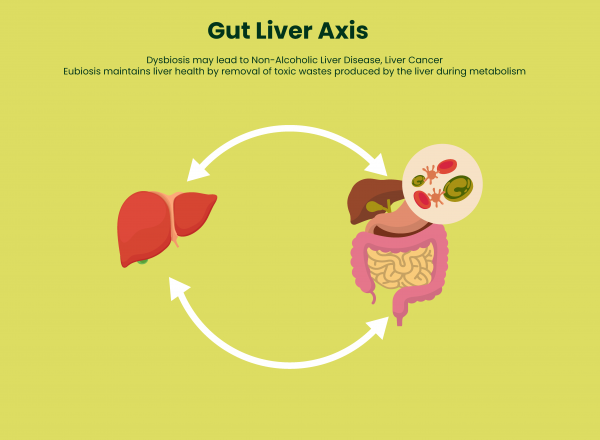 Recent researchers have found a strong relationship between gastrointestinal disorder and kidney diseases. The toxic wastes sometimes released by the bacteria in our gut are eliminated by our kidneys through filtering out in urine. However, a high protein diet derived (especially from red meat) produces high amounts of uremic toxins upon fermentation by gut bacteria leading to kidney malfunctions including Chronic Kidney Disease (CKD).

Conversely loss of kidney function leads to secretion of urea into the gastrointestinal tract. Subsequent hydrolysis of urea by urease, expressed by some gut microbes, results in the formation of large quantities of ammonia, which could affect the growth of commensal bacteria. Hence, the two–way relation between gut and kidney is essential for healthy waste elimination process in our body.

The food we eat comprises different compounds. Our body needs some of those compounds, called as nutrients, for carrying out various functions. The ones that are not needed are excreted by the body and are called toxins. In utilizing the nutrients gut, microbiome plays a very key role. Food-gut- human axis is the one that mainly defines the connection between food we eat and the role of gut bacteria in maintaining our good health. The kind of food we eat may define the type of colonies of bacteria in our digestive tract and hence define our health. The foods that are known to ensure healthy gut bacteria are fall primarily under two categories– prebiotics (the dietary fibres in the meal) and the probiotics (the fermented foods). 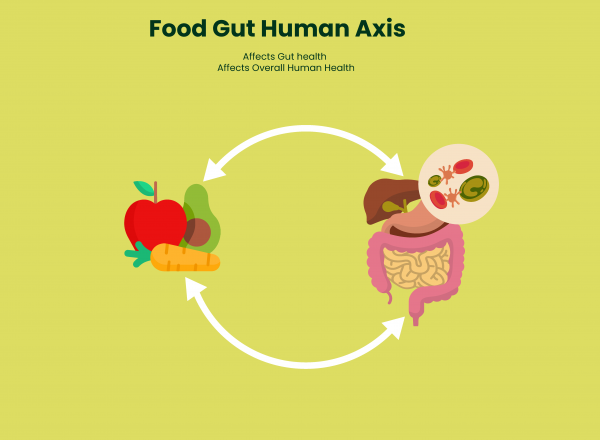 To sum up, to keep the body healthy, it is essential to keep the organs well-functioning and in good shape. Different kinds of healthy and fresh foods help us ensure a happy gut that leads to healthy organs and happy body.

Disclaimer: The information provided in this blog, or any linked materials, are not intended & should not be construed as medical advice. Please consult a certified healthcare professional in case of a medical concern.

Improve the functioning of your gut. Sign Up today!

Talk to our Health Expert today to know more!

– Live Online Sessions
– Designed, validated & conducted by experts
– Routines curated specifically to aid in addressing the root cause of Diabetes
– Components of exercise, yoga and meditation combined to derive the best from each discipline
– Sessions customized to suit your fitness/endurance levels
– Limited participants per session to ensure individual attention by the instructors
– Session timings aligned with your body’s Circadian clock